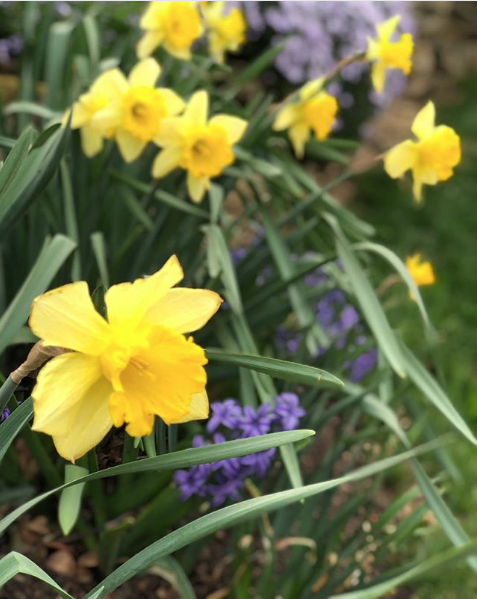 John Dickerson shared a post on Instagram: "Dorothy Wordsworth did not have an instagram account. She had a sturdy journal though, and in it she recorded the joy she and her brother William felt at finding a line of daffodils stretching around a lake. She captured the moment so well that two years later, William wrote a poem about that spot of time. My mother recited its last two lines every time she saw daffodils, which she often asked me to pick in bunches. When I saw this knot on our walk with the dog, those lines appeared all at once. They appeared again in the kitchen, when my son showed me the poems he’s studying, which included The Daffodils. It’s a poem about nature’s imprint, which flashes on Wordsworth’s inward eye long after the day he and his sister discovered the flowers, and remind him afresh of their joy. His poem, of course, leaves its own imprint. His aim was to “see into the life of things” which is more precise than an Instagram snap. People who never experienced either of his discoveries feel their echoes. It’s a pretty precise echo. I looked in my copy of Dorothy Wordsworth’s journal for the entry on the day of their daffodil discovery. It’s April 15, which is today.". Follow their account to see 1602 posts.