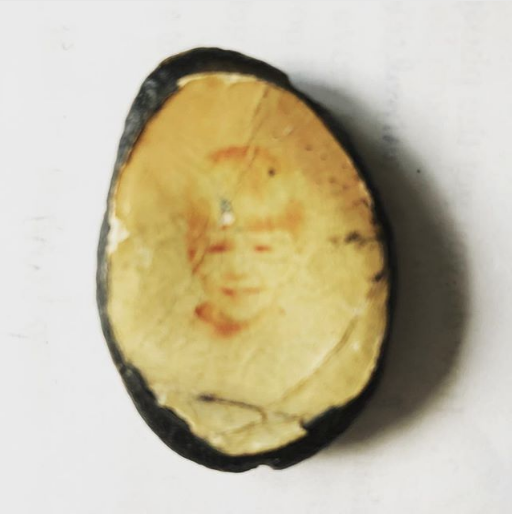 John Dickerson shared a post on Instagram: "I was looking for my passport & found this. It is a picture, from Franklin Sherman Elementary, pasted on a skipping stone. We made it for our parents in class. My Mom, who died 20 years ago, kept the stone on her desk when I was growing up. It was the kind of desk people who had jobs had, but it was in our house. You sat on the other side in chairs, like you were applying for a loan. Two fountain pens faced away from you, mounted on an award she'd been given by a chamber of commerce or rotary club. Her phone had buttons that illuminated depending on the line you were on. When you pressed them the click let you know you were doing something substantial. Her scissors sang when you worked them, sharp & pointed & Medieval --something a royal Maester would use to deliver a preparation at midnight in low candlelight. She was an independent television journalist trying to score big interviews—the only way she could convince a station to buy her work & put it on air. From that desk she pitched across the world to Anwar Sadat, Menachem Begin& Prince Saud al Faisal. They said yes. The show, which aired on PBS in early 1980, was called Assignment Middle East. I was reminded of it recently when @norahodonnell came back from interviewing the Saudi crown prince for 60 Minutes after two years of trying to land the interview. The last time I saw this stone on that desk Mom& I weren't on great terms. Dad had moved out& I was right behind him. I was 14, the age my kids are now. I think I put that dot on my forehead with a ballpoint pen to mar the symbol of a cuter relationship. A picture of your so on a rock takes on weight when he doesn't come home from school each day. The picture has been fading even in the file drawer. There won't be much left soon. It brought me back to the days of boxed milk & Styrofoam lunch trays. I went looking for the passport& this was the passport I found. I was not the only one doing time travel this week. My son watched a documentary in his Middle Eastern history class this week. A woman with a big necklace interviewed Egypt's Anwar Sadat. It was his grandmother whom he never met, but who kept a picture of his father on a stone on her desk". Follow their account to see 1602 posts.